The Paris Agreement is a landmark agreement to combat climate change and to accelerate and intensify the actions and investments needed for a sustainable low carbon future. The Paris Agreement builds upon the Convention and – for the first time – brings all nations into a common cause to undertake take ambitious efforts to combat climate change and adapt to its effects, with enhanced support to assist developing countries to do so.

The Paris Agreement requires all Parties to put forward their best efforts through “nationally determined contributions” (NDCs) and to strengthen these efforts in the years ahead. This includes requirements that all Parties report regularly on their emissions and on their implementation efforts. There will also be a global stocktake every 5 years to assess the collective progress towards achieving the purpose of the agreement and to inform further individual actions by Parties.

To meet this commitment, Indonesia aims to enhance the use of new and renewable energy from 17% to 23% of total energy consumption in 2025 and up to 29% in 2030. Additionally, to improve land use management, Indonesia has extended the moratorium on new forestry concessions from 2015 to 2017. We also are committed to restore 2 hectares (5 acres) of peat land by 2020. 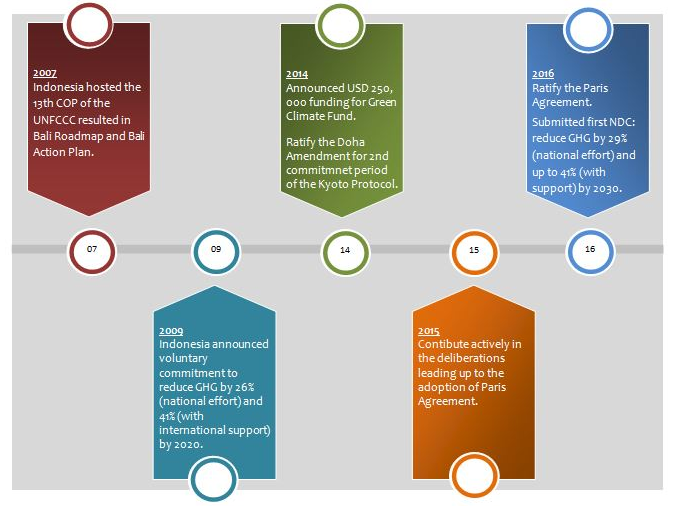 Furthermore, in its updated energy plan, released in 2018, foresees overall lower coal capacity additions than previously stated, but still adds 27 GW of coal-fired power in the next ten years and only 15 GW of renewables over the same period. Planned capacity additions for both gas and renewables have been slashed in favour of coal, and most of the planned renewables come in well after 2020, while a significant share of the planned coal will be commissioned between 2018 and 2022. Between 2012 and 2017, Indonesia’s coal capacity has already increased by 12.2 GW compared to 1.6 GW of renewable energy. By continuing on this high carbon path, Indonesia is risking significant stranded assets in both domestic coal production and coal power plants.

More on Indonesia’s NDC please click the link below:
https://www4.unfccc.int/sites/submissions/INDC/Published%20Documents/Indonesia/1/INDC_REPUBLIC%20OF%20INDONESIA.pdf