Sustainable development is a national goal in Indonesia, balancing economic growth, social inclusion, and environmental protection. Implementation of the 2030 Agenda in Indonesia is built upon the MDGs achievement. Indonesia has enacted a Presidential Decree as the legal basis for SDGs implementation.An inclusive National Coordination Team is also established, represented by all stakeholders under direct leadership of the President.

Our poverty alleviation strategy focuses on 3 areas: comprehensive social protection; provision and improved access to basic services; and sustainable livelihood. In the past 10 years, Indonesia has successfully reduced the percentage of population living below the national poverty line from 17.75% in 2006 to 10.70% in 2016.

Indonesia has also endeavored to provide comprehensive social protection. A major effort is the implementation of the National Social Security System in Health Sector. Our National Health Insurance scheme has covered 172 million beneficiaries or 66.4% of the population in 2016. This has made it one of the largest schemes in the world.

At the global level, Indonesia’s possitive contribution to the development of the 2030 Agenda is reflected in our role as one of the co-chairs of the High-level Panel of Eminent Person advising the UN Secretary General on the development of global framework beyond 2015. In Asia and the Pacific, Indonesia has also been actively involved in the development of a Regional Roadmap for SDGs implementation.

Effective SDGs implementation, both in Indonesia and at the global level, requires revitalized international partnership. As a middle-income country, Indonesia has been and will continue contributing to the efforts of other developing countries through its South-South and Triangular Cooperation (SSTC) program. Our SSTC programs are focused on poverty alleviation, for instances training and knowledge sharing on food security and agriculture. 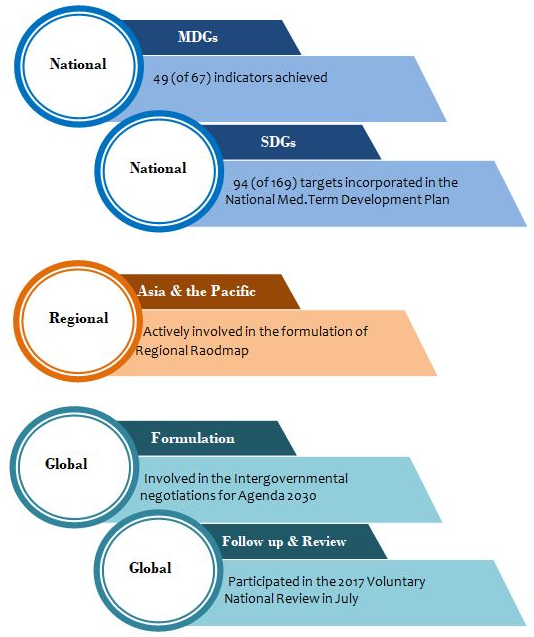