As the world’s largest archipelagic state, the ocean plays an undeniably central role in Indonesia. With a water area that is nearly four times larger than its land area, the country derives pivotal benefits from the sea for its economy, geopolitics, culture, and natural environment. Situated at the center of major maritime trade routes, its seas are a gateway linking Europe, the Middle East, Africa, and South Asia. Its coastal and marine waters make up one of the most fertile fishing grounds in the world: Indonesia is the second largest fish producer in the world. Roughly 55 percent of this production comes from coastal areas, particularly from seagrass beds, mangroves, coral reefs, and estuaries. The country has the world’s largest area of mangrove forests which cover about 3 million hectares and contain five times as much carbon per hectare as tropical forests. 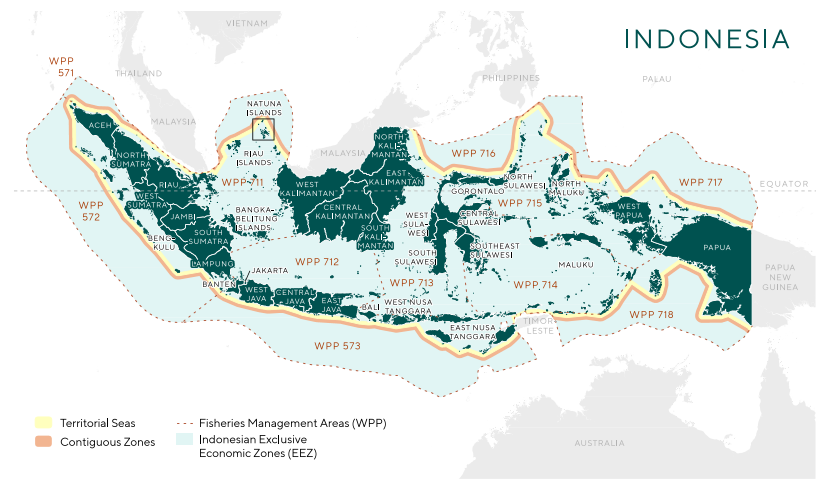 The fisheries sector is an important contributor to national food security in Indonesia. Indonesia is one of the most bio-diverse marine areas in the world, having approximately 8.500 fish species, 555 seaweed species, and 950 coral reef species. In addition, Indonesia’s marine sources cover 37% of fish species in the world, of which some, such as tuna, shrimp, lobster, coral fishes, seaweed, and other kinds of ornamental fish, have great economic value. With Indonesia’s wealth of marine resources, it comes as no surprise that this country is currently the largest seaweed provider in the world and one of the largest global suppliers of tuna, and shrimp. Additionally, with its rich fish resources, the country is also able to supply 30% of the world’s fishery product needs.

Indonesia’s fisheries sector, as measured by gross domestic product (GDP), grew 7.3 percent in 2014 and 5.9 percent in 2017. Indonesia’s GDP from fisheries sector in 2014 was Rp 245.48 trillion, in 2015 Rp was 288.9 trillion, in 2016 Rp 317 trillion, in 2017 Rp 349.53 trillion and in the second quarter of 2018 was Rp 187 trillion. 2019, that said, the sector’s contribution to GDP has remained small and relatively flat over the past several years, averaging about 2.0 to 2.5 percent. In the Indonesian context, fisheries also contribute to food security and enable enterprises in supporting sectors such as energy, telecommunications, logistics, and ecotourism

As the fourth most populous nation in the world with a population of over 260 million, Indonesia remains a major seafood consumer. The country’s average fish consumption was 41.11 kg/capita/year (KKP, 2016). Around 70% of fish production is consumed fresh, while 30% is eaten in preserved or processed form. Skipjack tuna is reported to be the most commonly consumed marine fish, followed by anchovy and Indian mackerel, whereas for inland species, tilapia ranks first followed by catfish and common carp. 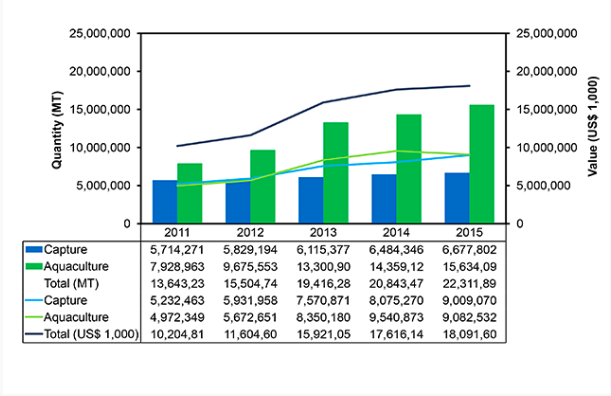 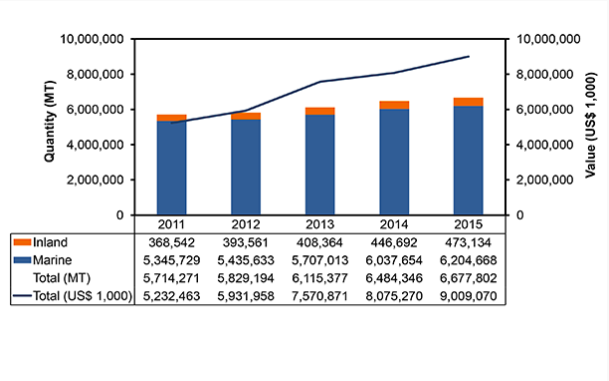 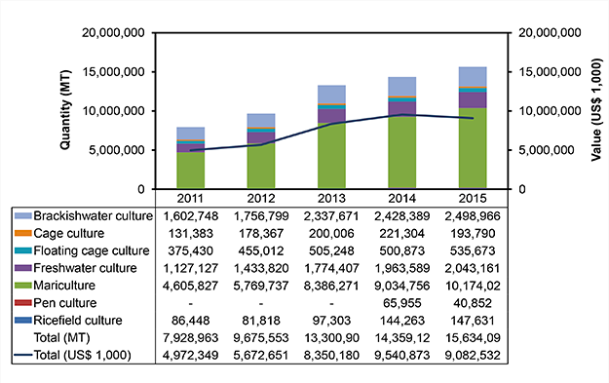 Realizing the potential of its fisheries sector, the government through the Ministry of Marine Affairs and Fisheries (MMAF) aims to make Indonesia the largest fish exporter in the ASEAN region. Through the MMAF the government has placed a restriction on fish imports into Indonesia’s territory to strengthen and protect Indonesia’s fisheries. This means that foreign countries can import their fish into Indonesia’s territory, but import activities are still strictly monitored to ensure a balancing of imports with the needs of Indonesia’s population and local production.

However, Indonesia is still open to imports of numerous types of fish from foreign countries to fulfill the needs of the domestic fish processing industry. MMAF strictly supervises fish imports. If imports come from countries that have an official warning or so-called “yellow card”, the fish products are prohibited from entering Indonesia’s territory.

Global markets for fishery and seafood products are still open, but competitive. Indonesia has to be prepared to compete with other ASEAN countries on the market for fisheries products. The MMAF has initiated plans to strengthen and support Indonesia’s fisheries industry. The plan includes the improvement of policies to enhance living standards of fisherman and the sustainability of the fish sector, as well as to boost investment.

Until recently, these policies have been seen to sustain the fishery sector. Amongst others these policies include; firm action against Illegal, Unreported and Unregulated (IUU) Fishing in Indonesia waters, improving the quality of national fisheries products, accelerating the development of 15 integrated marine and fisheries development center (SKPT) in outer islands, opening six subsectors of the fishing industry to foreign investment, the provision of fishing equipment and storage processing facilities (e.g. modern ships and cold storage), and facilitating access to financing for fisherman.

Illegal, unreported, and unregulated (IUU) fishing remains one of the greatest threats to marine ecosystems due to its potent ability to undermine national and regional efforts to manage fisheries sustainably as well as endeavours to conserve marine biodiversity. IUU fishing is found in all types and dimensions of fisheries; it occurs both on the high seas and in areas within national jurisdiction, it concerns all aspects and stages of the capture and utilisation of fish, and it may sometimes be associated with organized crime. IUU fishing therefore threatens livelihoods, exacerbates poverty, and augments food insecurity.

Indonesia has become a victim of illegal fishing. According to data released by the FAO, every year Indonesia loses USD 3 billion. MMAF reported that Indonesia has lost roughly USD 20 billion every year. However, firm action against IUU Fishing in Indonesia waters has been implemented through several activities. The government responded by establishing the Indonesian Presidential Task Force to Combat Illegal Fishing (SATGAS 115) to employ administrative, legal and maritime law enforcement (MLE) tools within the Indonesian bureaucracy to combat the threat, as one of the activities being to sink foreign vessels caught fishing illegally in Indonesian waters. By August 2018, Indonesia had sunk 488 illegal fishing vessels since October 2014.

Indonesia’s firm action against illegal fish capture will definitely reduce the numbers of IUU practice in Indonesia and in the long run, benefits from the stringent policy would be diretly related to the fish production, increased fish stock and revenue, increased prosperity for fisherman, and growth in fisheries non-tax revenue. 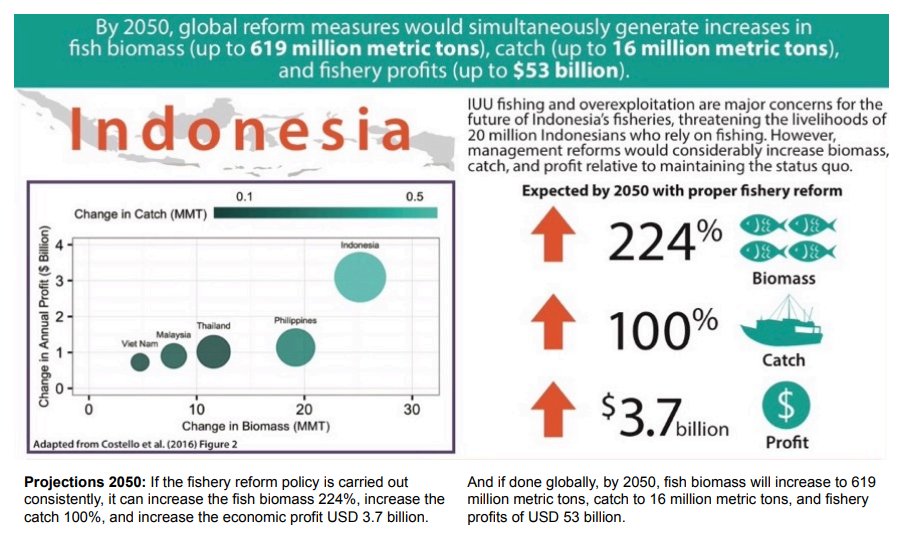 For the way forward, the Indonesian Government will enforce approaches to further combat IUU Fishing, that include:

The Indonesian ocean vision is to create Indonesia as the Global Maritime Fulcrum, namely to become a developed, sovereign, independent, strong maritime nation which is able to give positive contribution for peace and security in the region and the world in accordance with its national interests.

On February 20, 2017, President Joko Widodo signed Presidential Regulation No. 16 of 2017 on the “Indonesian Ocean Policy”. The national policy was issued as the guideline for, and to coordinate, all maritime-related policies and programmes across different ministries and agencies. The narrative through which the new policy is introduced portrays a strategic document that projects Indonesia’s interest and strategy in the region, and globally.

The national ocean policy has a clear elaboration of the important aspects of ocean management, and functions appropriately in its aim to coordinate maritime-related policies. It consists of seven main pillars, namely the management of marine and human resources development, maritime security, law enforcement and safety at sea, ocean governance and institutions, maritime economy development, sea space management and marine protection, maritime culture, and maritime diplomacy. The seven pillars are further elaborated into 76 programs spreading across various Indonesian ministries and agencies in charge of 425 activities designed to achieve 330 targets. 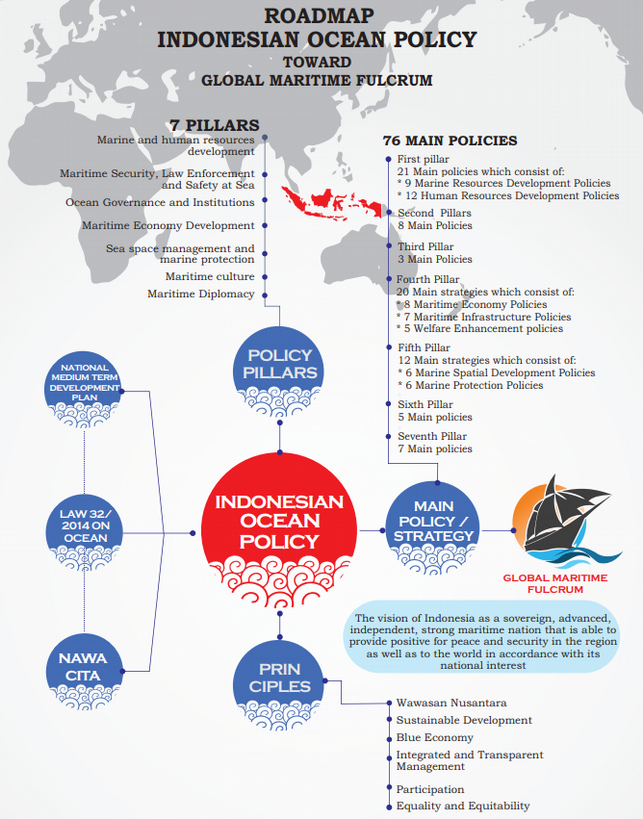 More information on the Indonesian Ocean Policy document can be obtained here.