Investment, together with manufacturing industry and export are the pillars of Indonesian economy. There are three aspects where investments shall contribute the most to the economy.
First, supporting sustainable economic growth. Indonesia is seeking quality investments that are not only targeting at market based, but also as production based. Investments that add value to Indonesia’s natural resources, contribute to Indonesia’s exports and substitute our import.
Second, creating jobs, improving productivity and competitiveness. Investment in manufacturing sectors is prioritized, especially labor-intensive industry, export-oriented and import-substitution industry, and also downstream industry of natural resources.
Third, promoting equal development distribution. We encourage more investments realized ouside Java island, the most populated island in Indonesia. Indonesia offers more incentives expecially to investments located in eastern part of Indonesia, such as Nusa Tenggara, Maluku, and Papua.
The Government of the Republic of Indonesia has laid the focus on several business sectors as planned in the Investment Strategic Planning for 2015-2019. These priority sectors were selected based on the economic advantages, growth factors and productivity aspects. These sectors are as follow:

The Government of the Republic of Indonesia officially launched “The Investment Licensing Service in 3 Hours” since January 2016. The service, which is part of the government’s economic package, aims to cut the time to complete licensing procedures at only 3 hours. The total permits issued by this service are ‘8+1’ products, as shown in the information below: 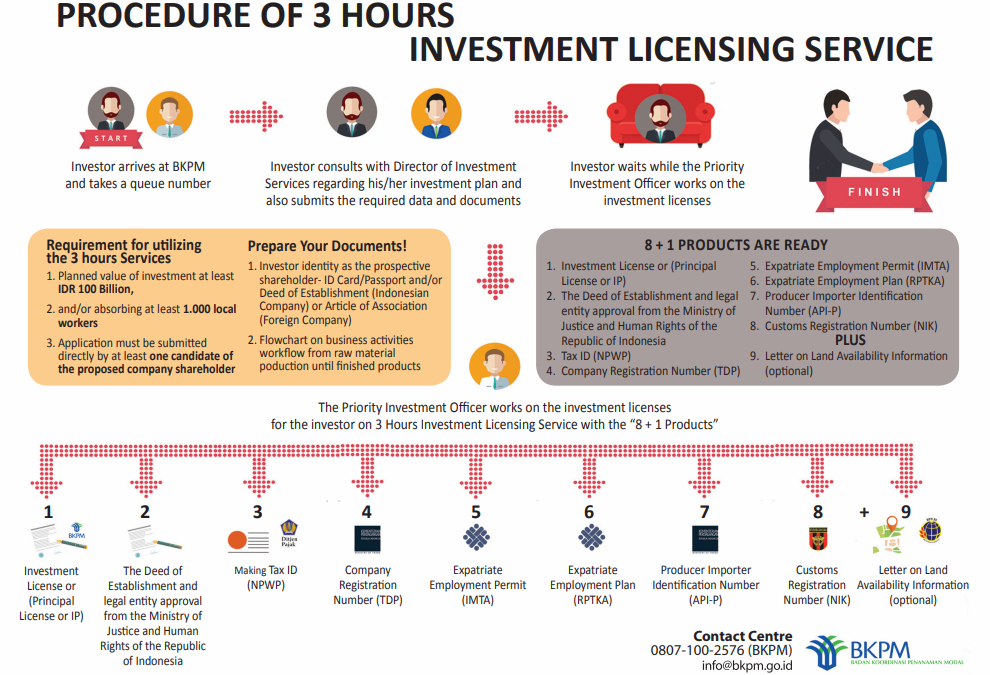 The criterias to obtain the quick service investment are:

As a nation with a favorable economic growth and stability, Indonesia’s monetary and fiscal policies have managed to maintain a positive signal. Numerous renowned credit rating agencies have rated Indonesia’s Sovereign Credit Rating at investment grade level. The key factors that support the decision are a low government debt burden and a favourable GDP growth outlook amidst external challenges, including a strong dependence on external sources of financing, and several structural indicators that remain below rating peers. Bank Indonesia’s decision to hike its policy rate and intervene in the foreign exchange market as a response to external pressures on emerging markets indicates a strong resolve to ensure stability.
Other key factors for the investment grade level was the fact that Indonesia’s external finances are strong than during the 2013 Taper Tantrum, resulting from a disciplined monetary policy stance in the past few years and macro-prudential measures that have helped curbed a sharp rise in corporate external debt. The rating agencies also acknowledged that Indonesia’s GDP growth and general-government debt burden continue to compare favourably with peers. Indonesia’s real GDP growth is projected to rise marginally to 5,2% in 2019 and 5,3% in 2020, supported by the continued public infrastructure spending push. In addition, the ratio of Indonesia’s general government debt to GDP already compares favourably with peers.
The upgrade by the rating agencies reflects the confidence on Indonesia’s economy. Strong commitment in maintaining macroeconomic stability and strengthening economic resilience amidst ongoing global uncertainty demonstrates the credibility of Indonesia’s authorities’ policy. Going forward, strong coordination among authorities in implementing the policy mix, including efforts to reduce current account deficit, will be strengthened to maintain macroeconomic stability and to preserve economic growth momentum. 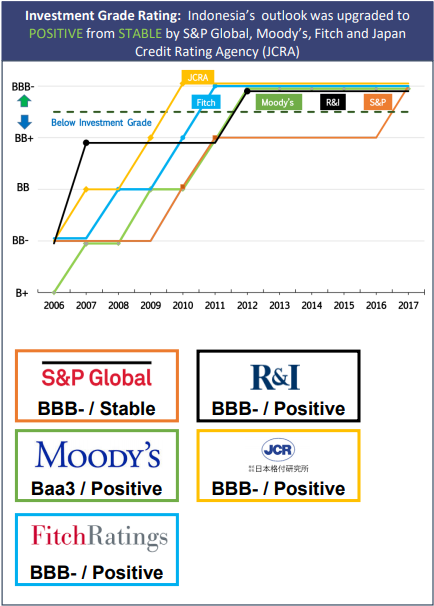 Having the urge to make investment in Indonesia, investor must adhere to some specific rules made by the government of Indonesia, especially regarding to what kind of business the investors going to establish. Although the government is welcoming as many investors as possible to Indonesia, there are some specific businesses which are not allowed. Those forbidden businesses are listed in the Indonesia Negative Investment List.

The business sectors which now open for 100% foreign ownership in trade are cold storage business, distribution affiliated with production, direct selling through marketing networks, and brokers. In tourism and creative economy, such as opening bars, cafes, restaurants, and sports facilities. While in communication and information sectors, there are investment that involved IDR 100 billion investment is allowed for 100% foreign ownership. Other, in energy and mineral resource sector, there is biomass pellet industry for renewable energy which open for 100% ownership.

On the opposite side, there are some business fields which are completely closed by the government for foreign investment as well as domestic investment. Those fields are national defense and environmental or health ground. You can’t also invest on management of land terminal for passengers, alcoholic beverages production, and establishing casino.

The latest Indonesia Negative Investment List (INIL) will be revised in the short future. There will be some prohibition removal to make it easier for investors to invest in Indonesia. The revision may not change much regarding the number of business sectors that investors can choose, but the revision will make sure that business sectors, which opened to investment, are completely free of obstacles. The 2016 regulation of the INIL can be found here. 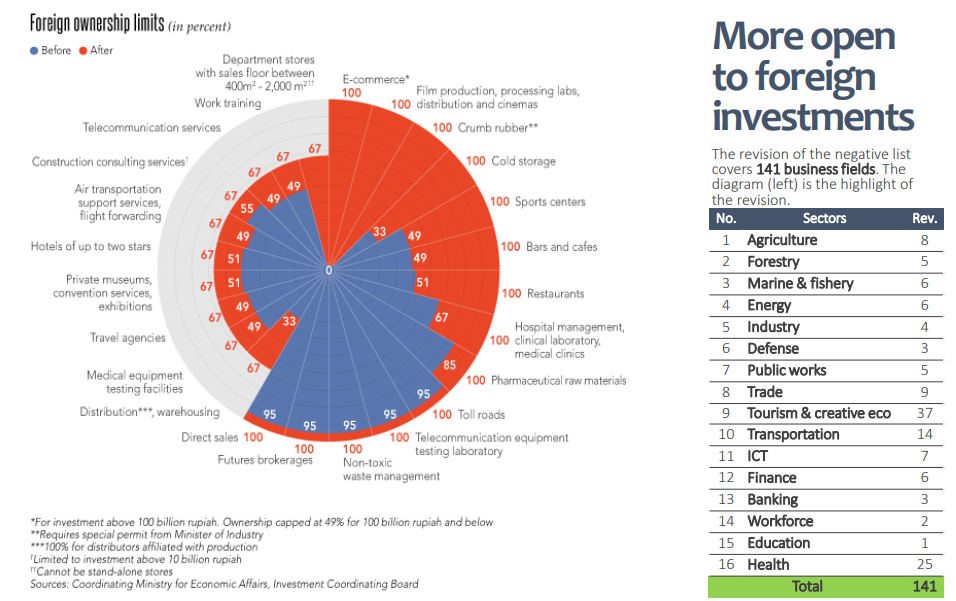